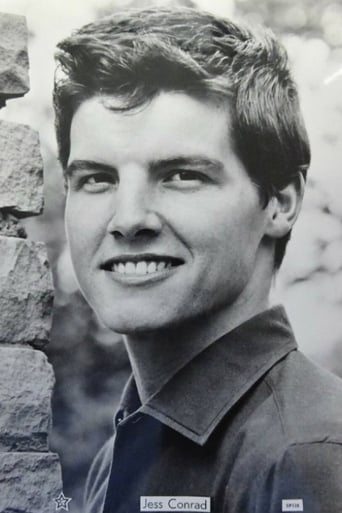 From Wikipedia, the free encyclopedia. Jess Conrad (born Gerald Arthur James, 24 February 1936, Brixton, London) is an actor and singer from England. He was popular in the late 1950s and early 1960s with a number of hits to his credit, "Cherry Pie", "This Pullover", "Mystery Girl" and "Pretty Jenny". He has recorded for Decca, Columbia, Pye President and EMI record labels. Since then his live performances have continued to be popular, with an ovation in 2005 at the London Palladium when sharing a bill with Eden Kane, John Leyton, Marty Wilde and others. During the late 1950s and in to the mid 1960s Conrad appeared in a number of cult films, namely Serious Charge (uncredited), The Boys, Rag Doll, (filmed in 1960, and released in 1961); Kill 1 and Konga. He also featured in a cameo role in the Sex Pistols film The Great Rock 'n' Roll Swindle. Odeon recently re-issued one of his 1970s films on to DVD - Cool It Carol!. He appeared in the 1984 TV series of Miss Marple in the episode entitled The Body in the Library as Raymond Starr. He also starred in the 1990s film, The Punk And The Princess. Conrad is scheduled to appear in concert on 7 November 2010, at the Theatre Royal, Windsor, with Charlie Gracie, Brian Poole and Mike Sarne. A Freemason, he is a member of Chelsea Lodge No. 3098, the membership of which is made up of entertainers. Conrad shows no sign of retiring, and has been married to wife Renee for over forty years. March 2011 elected Captain Vaudeville Golfing Society. In recent years, Conrad has appeared in a number of documentaries and television programmes, often offering entertaining stories of violent encounters with other famous people. In a BBC Arena documentary about the legendary record producer Joe Meek, Conrad boasts of biting off part of the nose of singer Heinz during a confrontation backstage at a package show in the early 1960s.Similarly, in Sex, Secrets & Frankie Howerd, he tells of threatening to cut off comedian Frankie Howerd's ears, when Howerd made untoward advances to Conrad in a dressing room. Description above from the Wikipedia article Jess Conrad, licensed under CC-BY-SA, full list of contributors on Wikipedia.